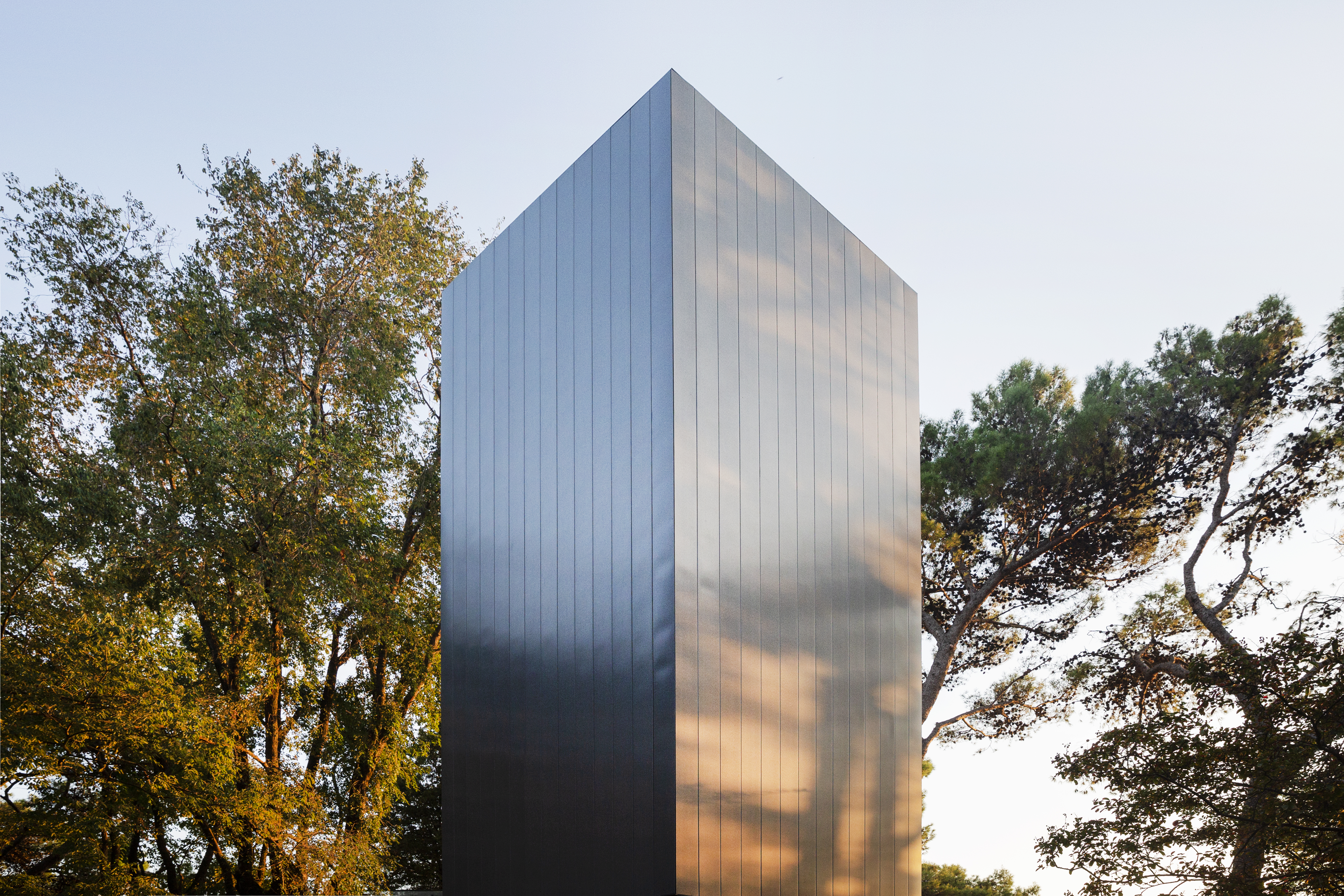 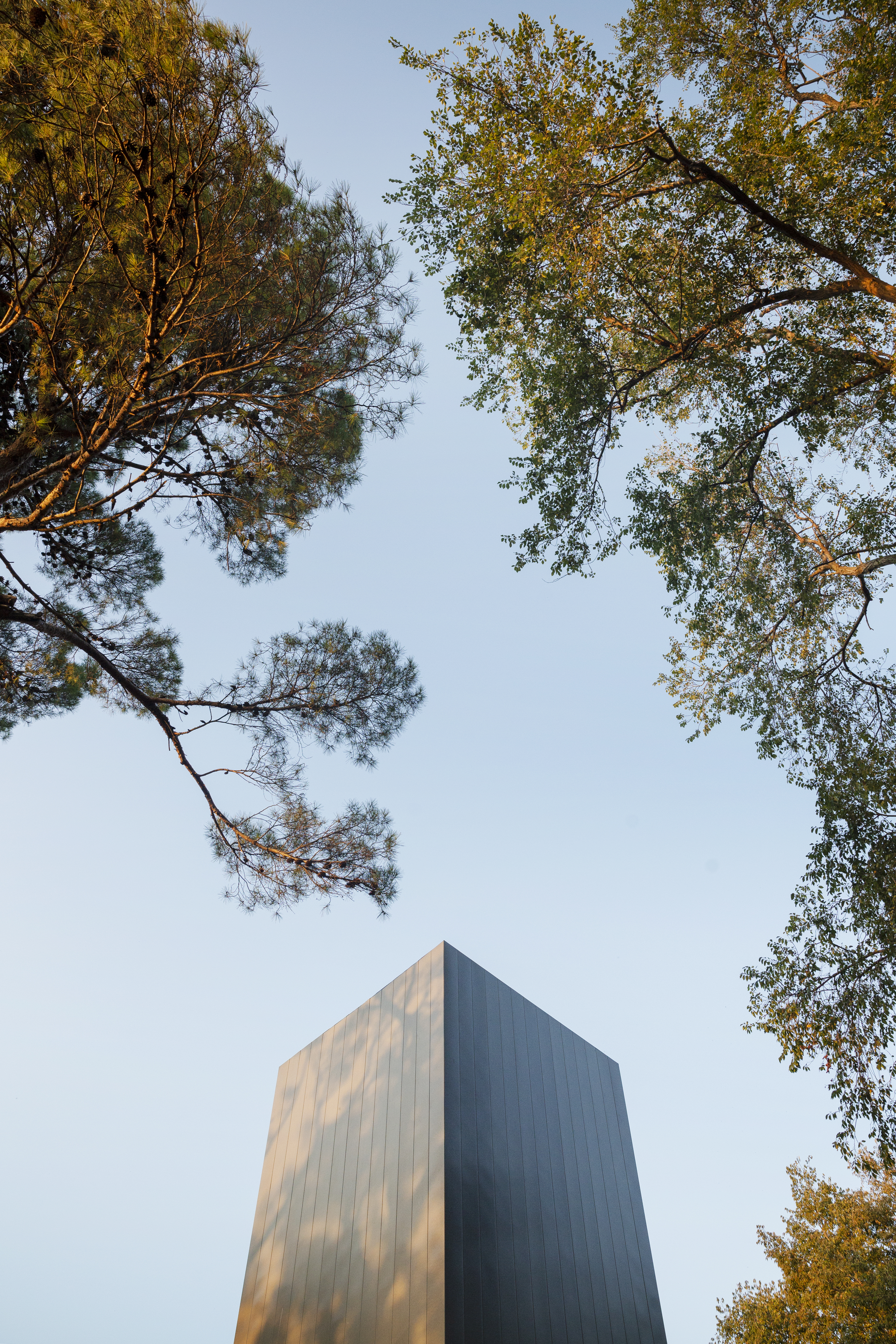 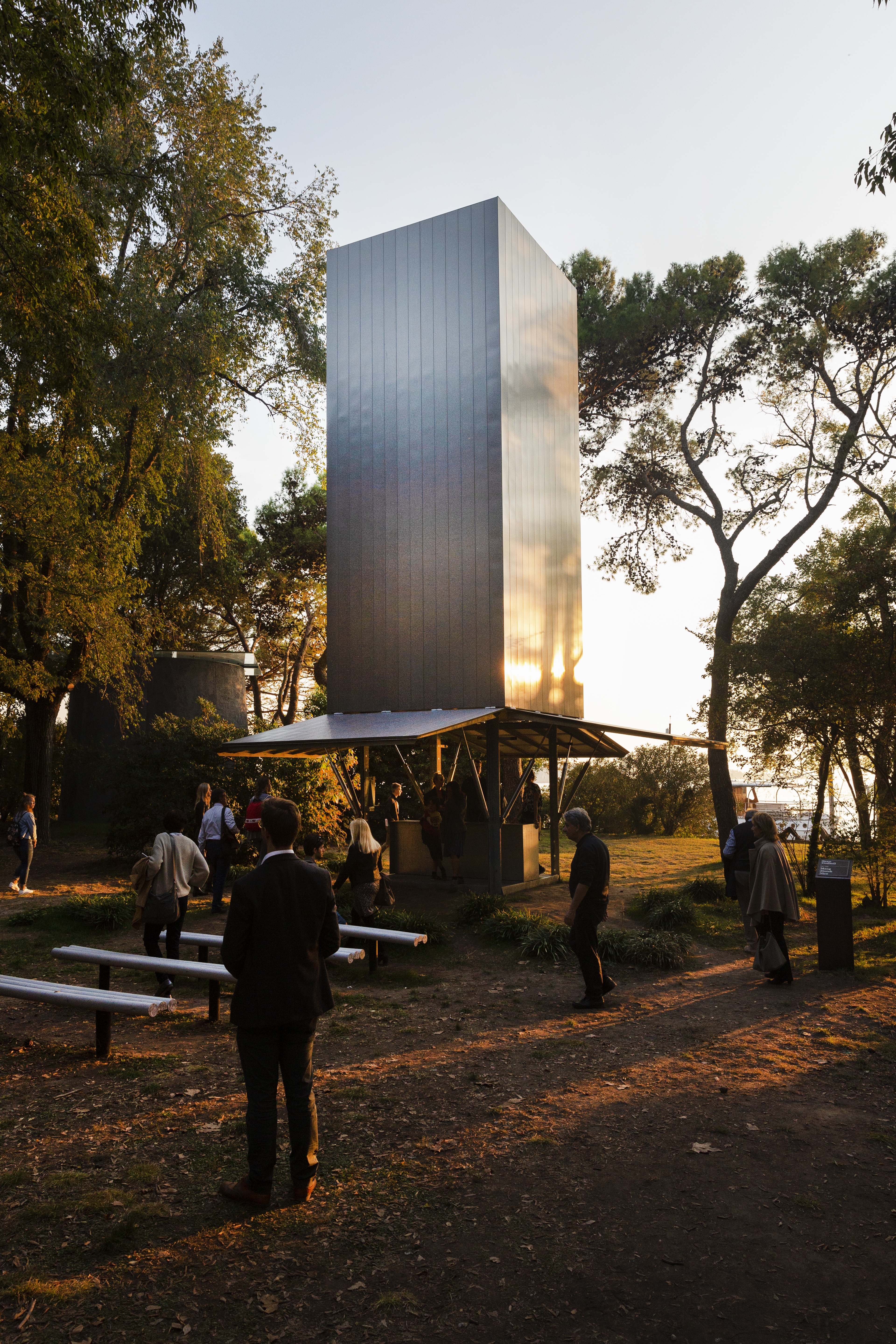 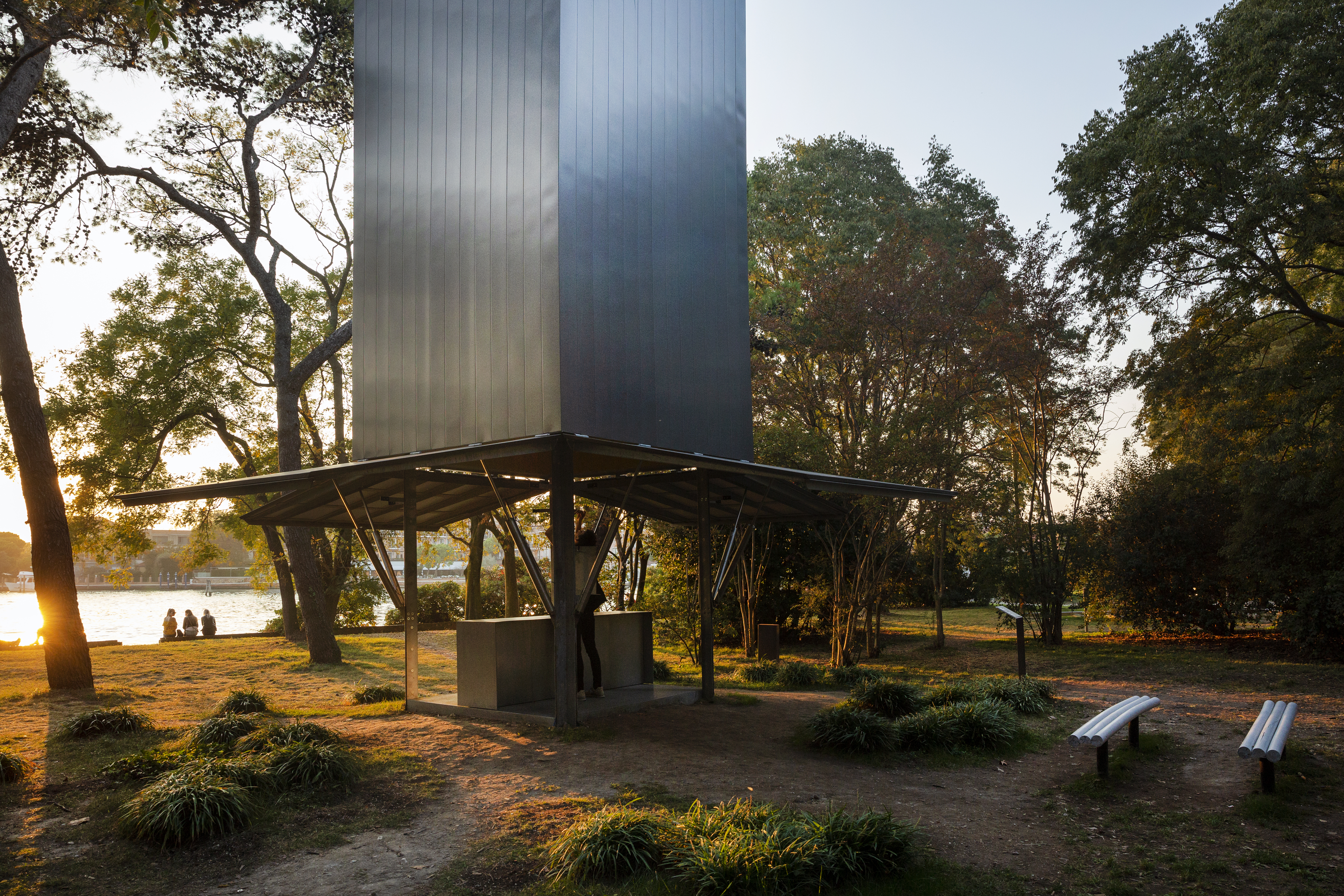 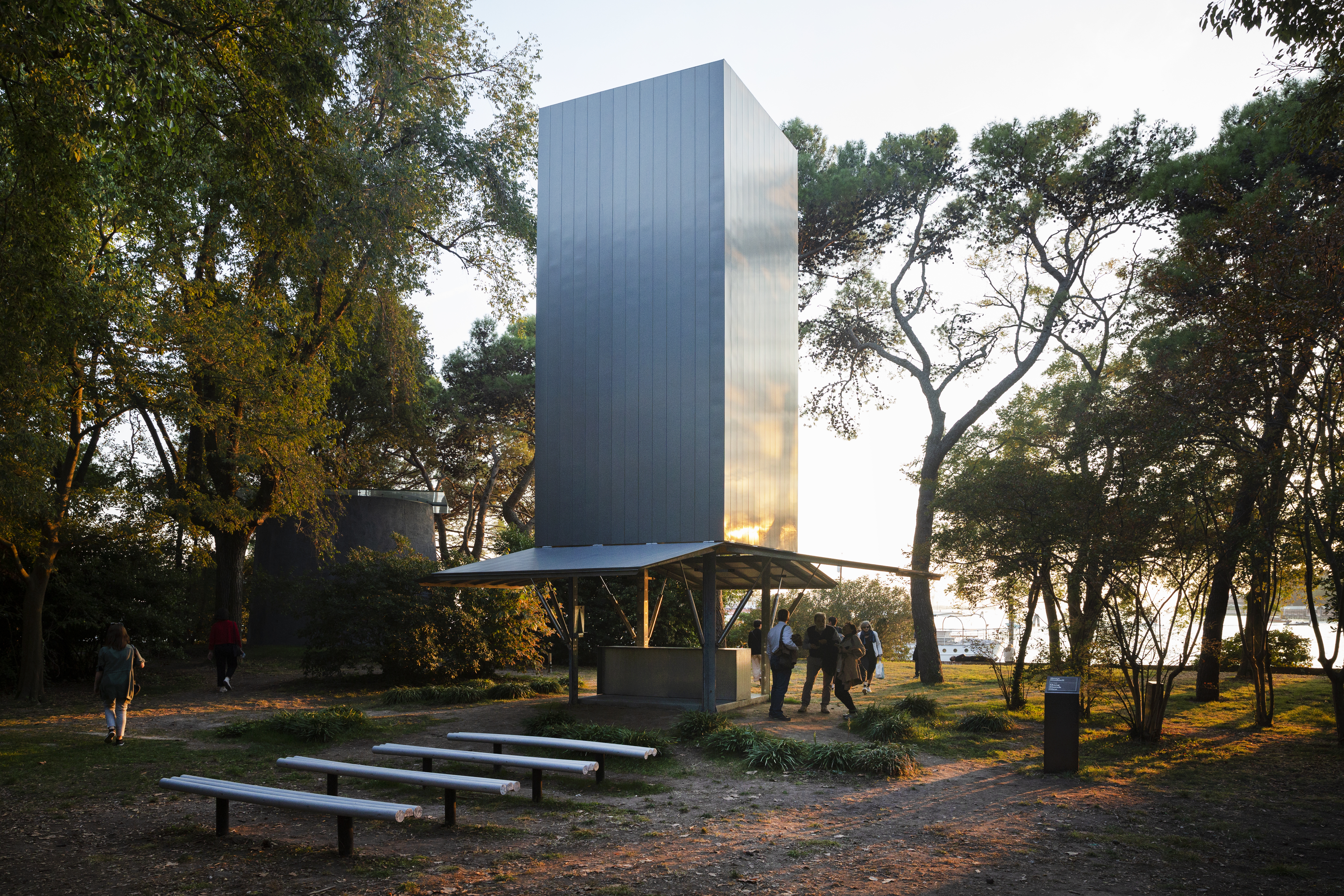 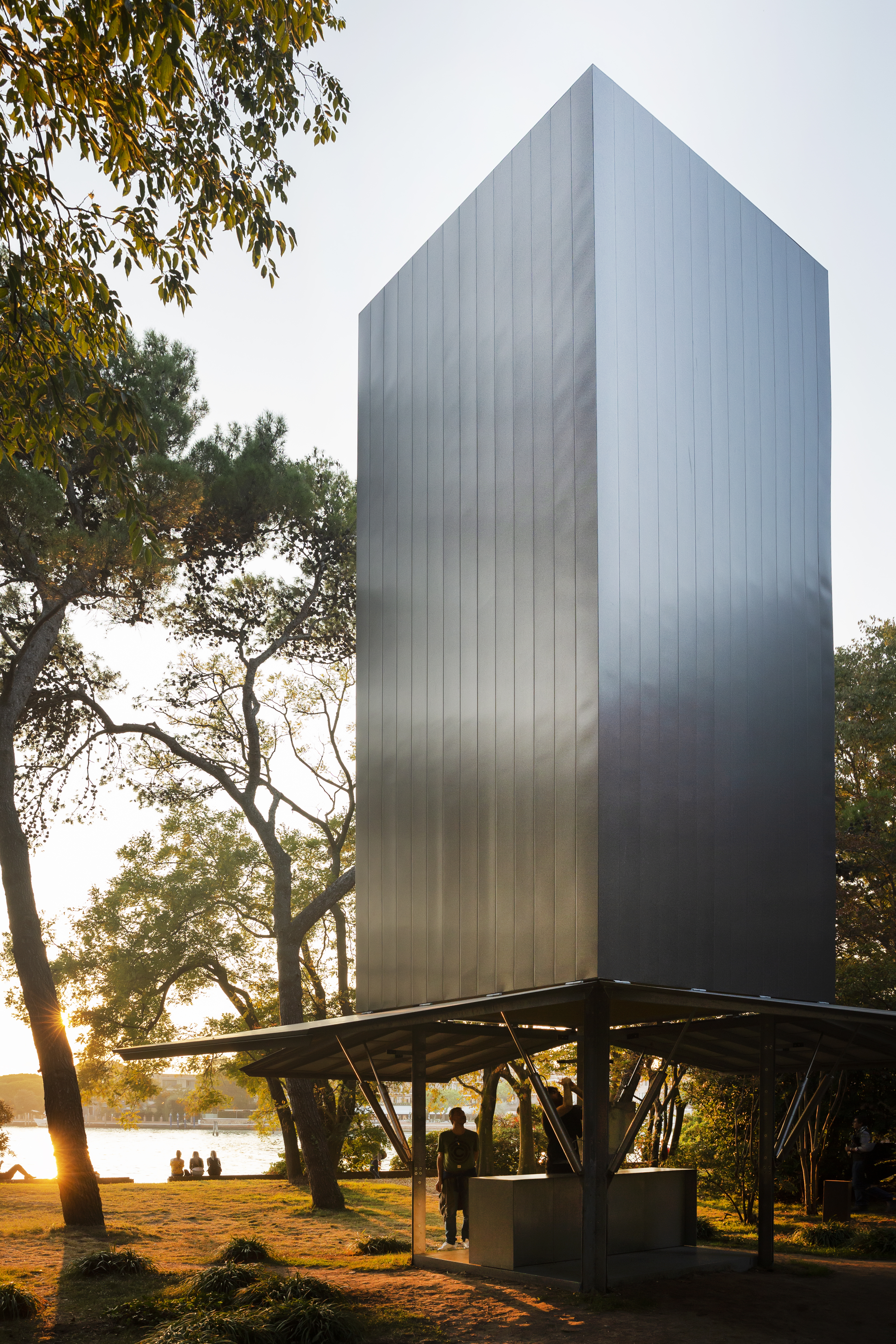 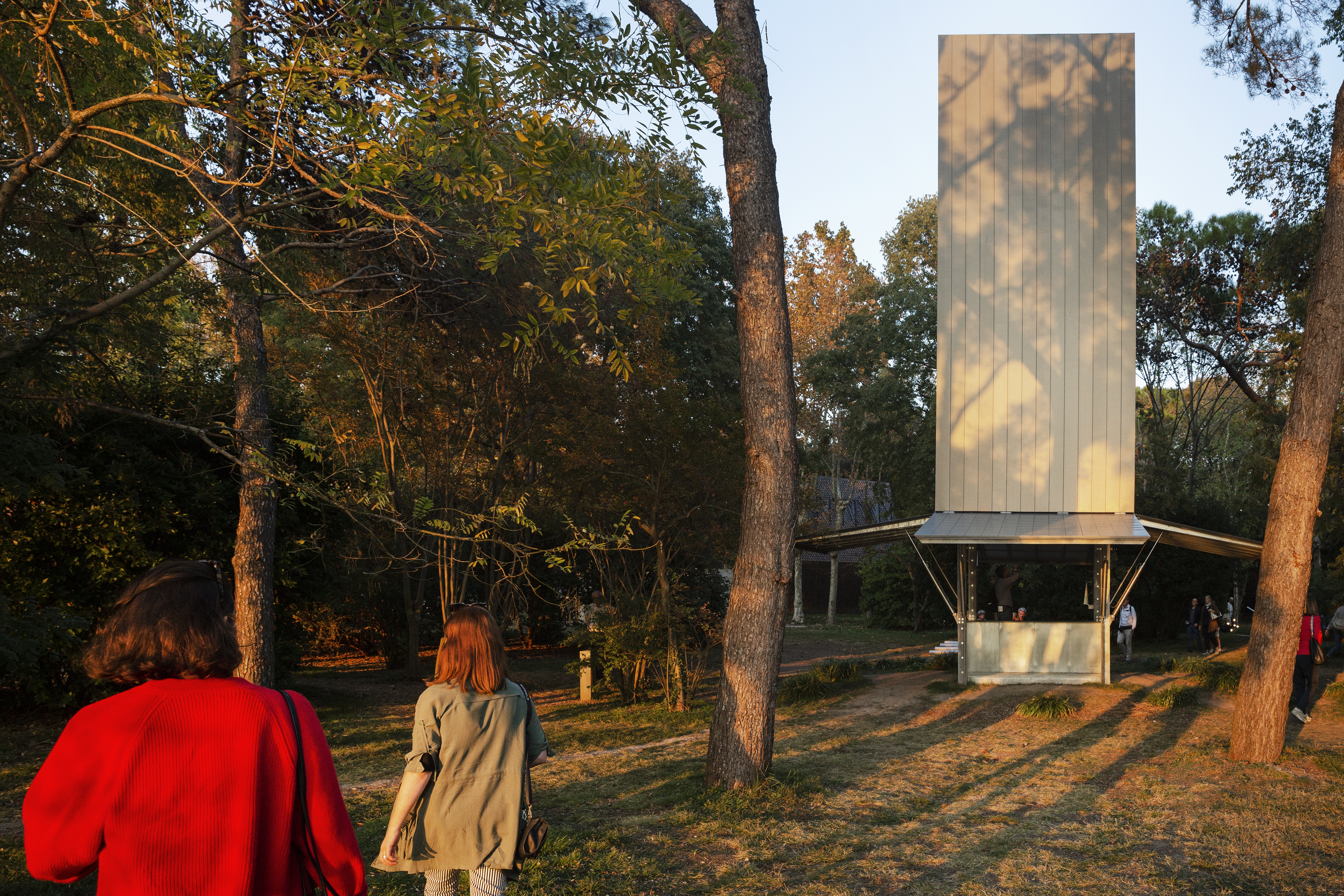 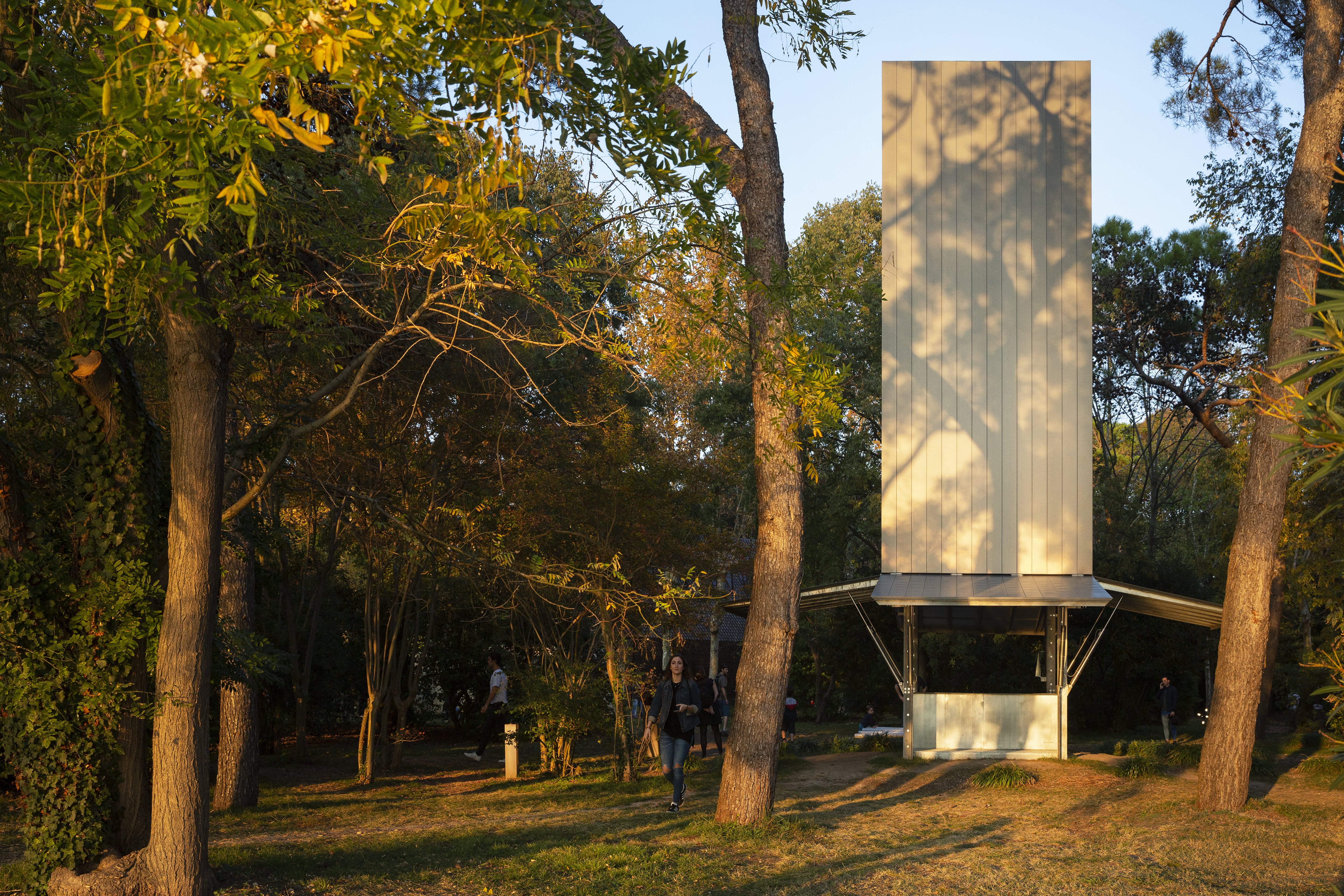 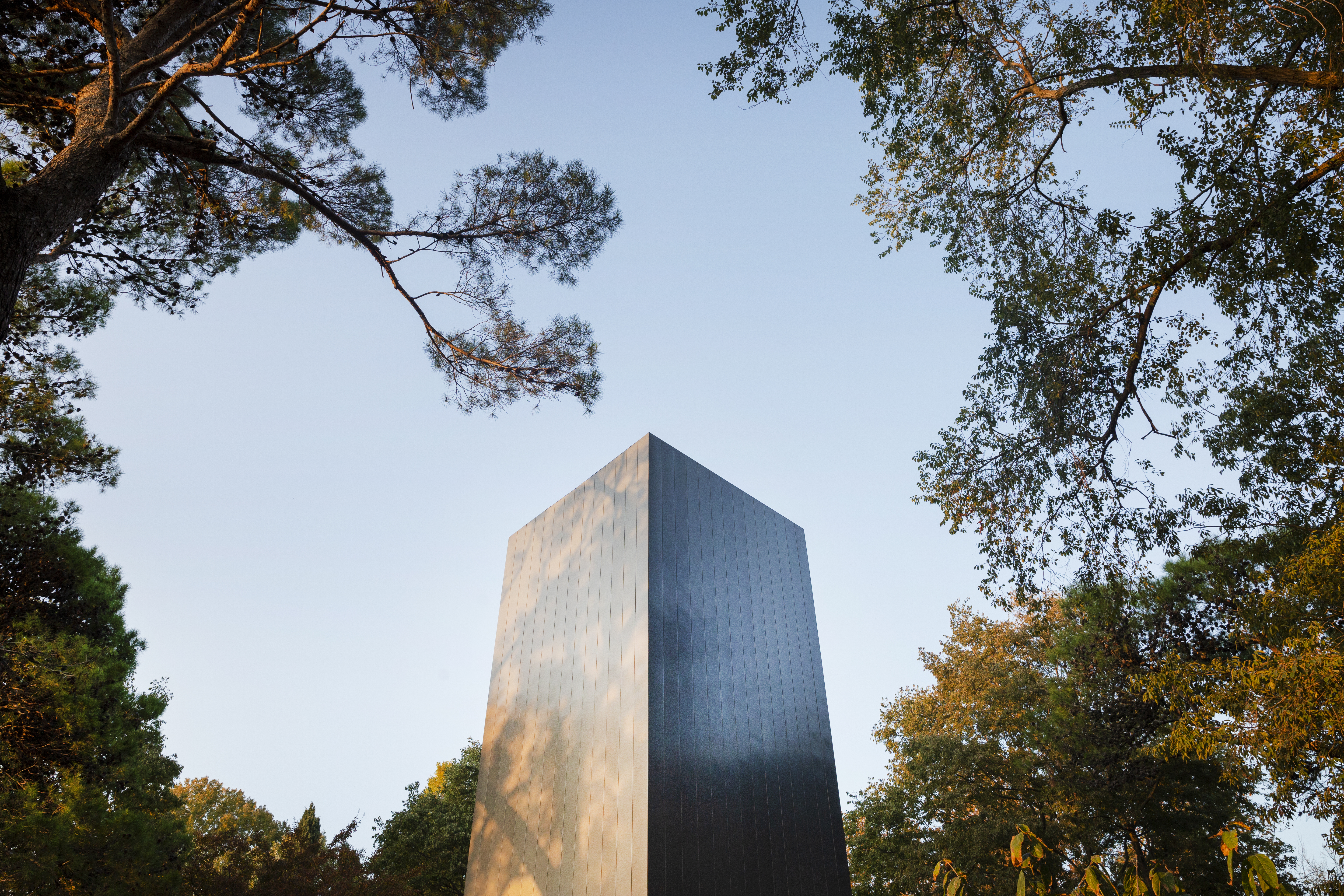 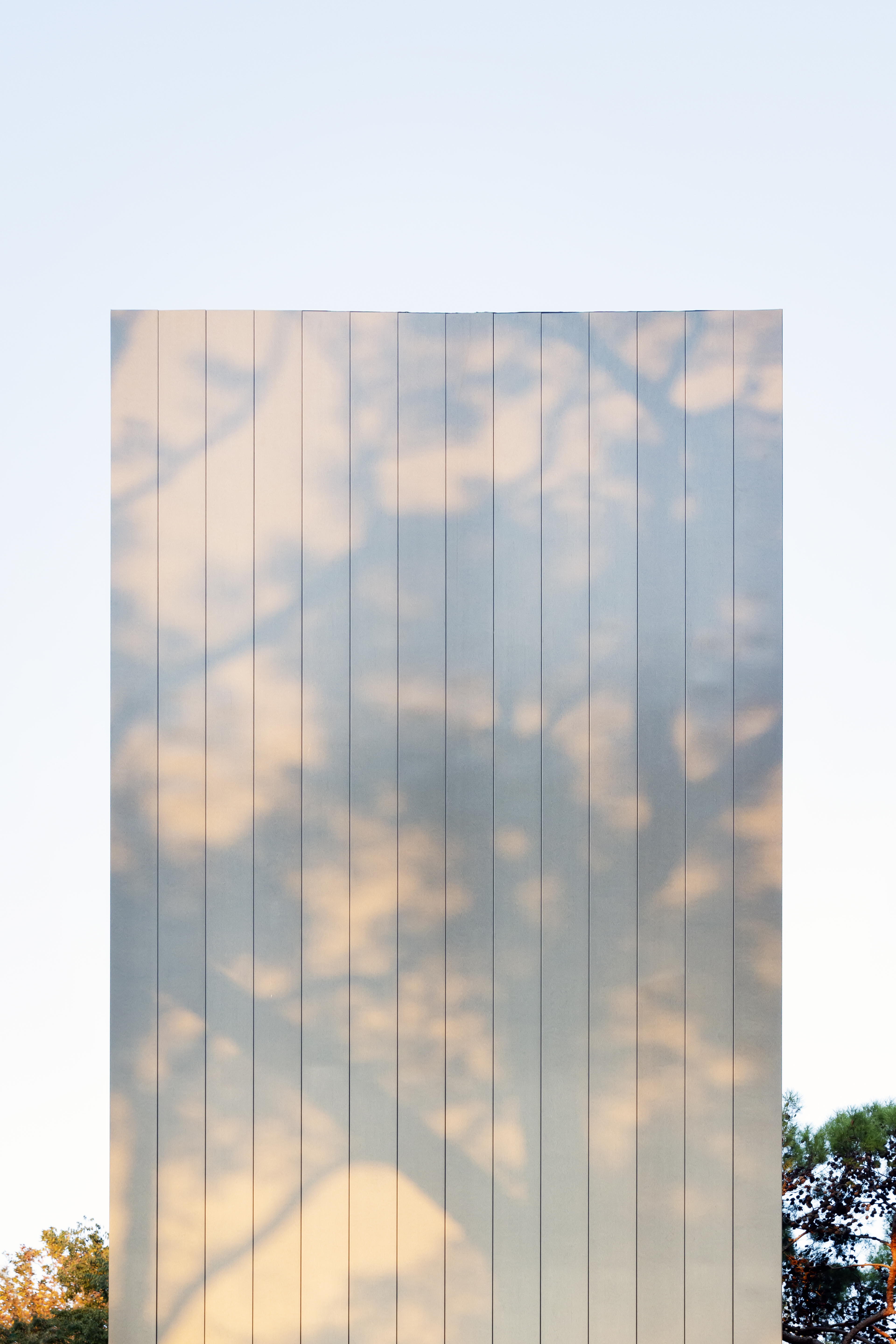 Frank Lloyd Wright was once asked “Do you believe in God, Mr Wright” to which he replied “Yes..but I call her ‘Nature’”

Our brief was straightforward. Each architect was allowed a maximum building area of 60 sq m and to only include a lectern and an altar inside the chapel. The chapels are transportable – destined to be re-erected in the various Italian villages that were recently devastated by earthquakes. The project curator, Francesco Dal Co provided Gunnar Asplund’s Woodland Chapel as the precedent building. Initially I looked at the shipping container – a ubiquitous object that I have previously considered as a mobile building module (see Future Shack) and our final design is based loosely on the dimensions of a 40’ container. I’ve always loved the bell towers of Venice – their daring engineering and bold verticality on the Venetian skyline is hard to ignore and originally my scheme included bells designed by the Australian master-bell maker Anton Hasell. The Vatican however was very strict about any architect deviating from the altar/lectern criteria and so in the end we abandoned the bells but live in hope that once relocated, they may be included and enjoyed in the chapel’s permanent home. The idea of the bell tower remains in our scheme and the altar is positioned directly beneath, on a platform elevated above the ground. The steel framed tower is bolted onto pile caps that are locked in turn onto wooden piles similar to those used historically throughout Venice. By building in this way our prefabricated chapel is fast to erect with an absolute minimum (four piles) disrupting the heritage listed site. All four sides of the tower open to reveal the altar and in doing so form awnings on each side. We designed pews assembled from recycled mooring poles from the canals and in practical terms the congregation can sit on any of the four sides, outside, in Nature. When open and viewed from the air the vertical doors of the chapel form a cross. The double steel equal angle corner posts are a deliberate reference to the German architect Mies Van de Rohe (who famously once quipped ‘god is in the details’) Making the congregation sit outside the constructed intervention causes an elaborate interplay between the constructed and the natural. This is a deliberate allusion to the radical teachings of the twentieth century French Jesuit philosopher and mathematician Teillhard de Chardin (whose radical views on cosmology and in particular god and the cosmos caused him, amongst other things, to be banished to the bleak Jesuit missions of China for two decades.)

The church of the twenty first century must be a peaceful, safe place, a multi-generational place, an engaging place for contemplation, self reflection and meditation and all of these before a space for liturgy, prayer, mass, hymn, dogma and ritual. A place where people feel comfortable and willing to congregate. Place – making and architecture are inextricably linked however architecture does not merely exist in bricks and mortar. Architecture exists in the human spirit. In certain circumstance and under the right conditions an architect can organise the components of a building in such a profound way that we engage with the result on an intellectual and spiritual, rather than merely physical, level. In his seminal text in Vers Une Architecture Le Corbusier famously describes it this way:

“You employ stone, wood and concrete and with these materials you build houses and palaces; that is construction . Ingenuity is at work. But suddenly you touch my heart, you do me good, I am happy and I say: ‘This is beautiful’ That is Architecture. Art enters in.”

Of these, the chapel at the monastery of La Tourette by Le Corbusier is my favourite. A few years ago I was asked by the Japanese publication Japan Architect to nominate my favourite building:

“I have recently been looking again at this masterwork by Le Corbusier. I visited La Tourette while on my ‘grand tour’ of Europe in 1985. I’ve never had the chance to go back but would dearly love to see it once more, this time through older eyes. I remember the uphill hike from the train station and the discrete three quarter view on approach. I was greeted by one of the monks who was happy to offer me accommodation for a modest sum. Like so many other visitors before and since I was able to stay in one of the spare ‘cells’ and enjoy the simple hospitality that the monks offered. I remember meeting a group of Dutch architecture students who were working away on restoring some paintwork in the chapel. There were other guests as well – we all dined together with the monks and any language barriers were easily overcome by a common interest in architecture. I still remember being struck by the rawness of the building – a raw subtlety of materials and finishes. A crudity of services. It was as if plumbing and lighting were almost an afterthought. I still remember how remarkably well proportioned the spaces were and how ‘Modulor’ dimensions were all pervasive. The relatively low ceiling space at the entry vestibule surprised me, as did the long narrow dimension of the monk’s cells but they worked beautifully and they countered and in the end complemented the building’s honed quality.

Most of all I remember the descending approach to the chapel door which was almost domestic in scale. Nothing prepares you for the spectacular space on the other side of this humble entrance. Entering the chapel at La Tourette for the first time made me gasp. Corb’s genius here matches Michelangelo’s Chapel of St Lorenzo the Magnificent – both are complex exercises in scale and proportion and light that result in moments of high architectural drama. The buoyancy of the light in the chapel at La Tourette stays with me. So does the rigour – the intensity of detail that runs through the building culminates in this most sublime space. Whenever I am struggling with a project or in doubt about how to solve a problem, I find that I am drawn to Le Corbusier, not to mimic his works but to learn from them.”