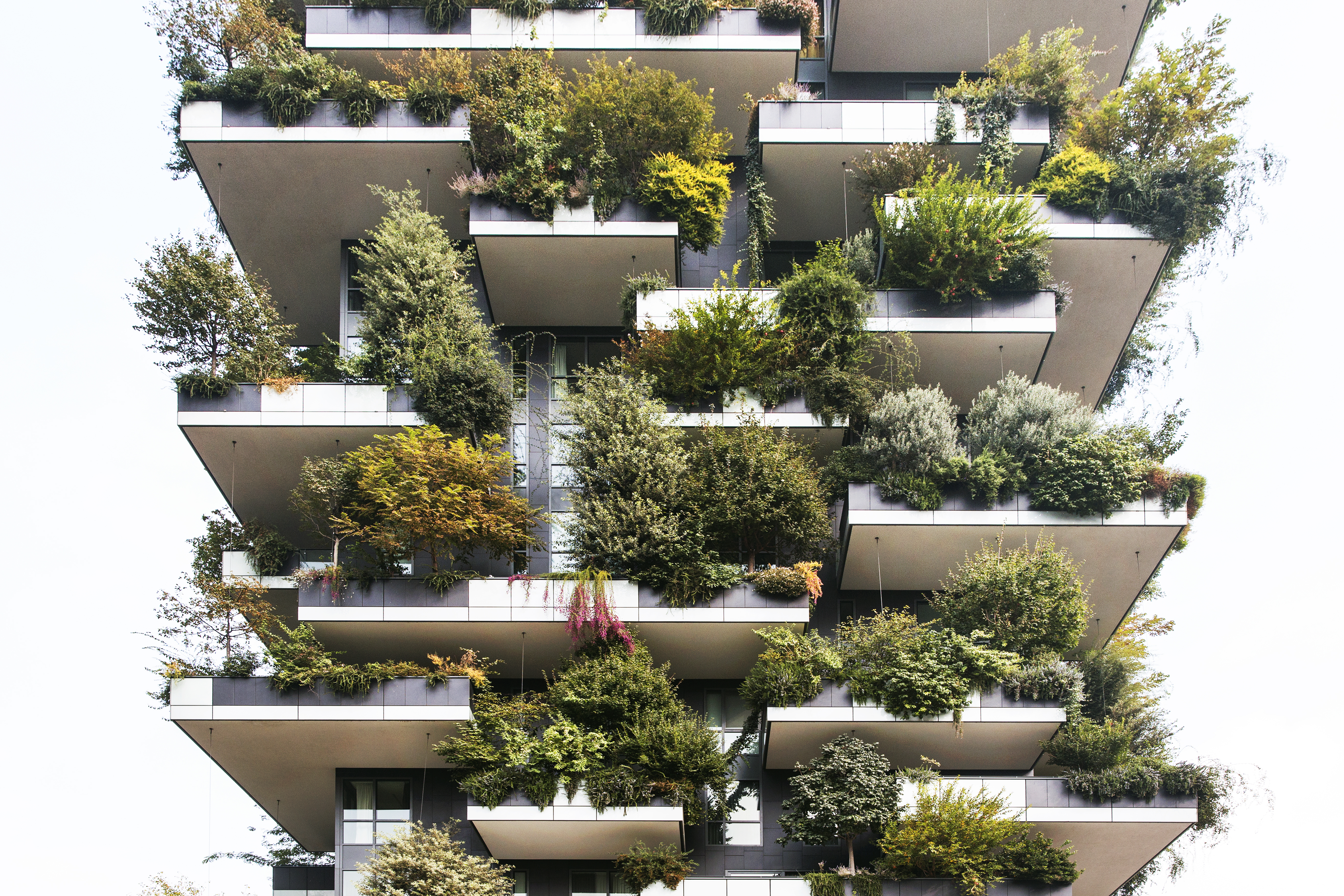 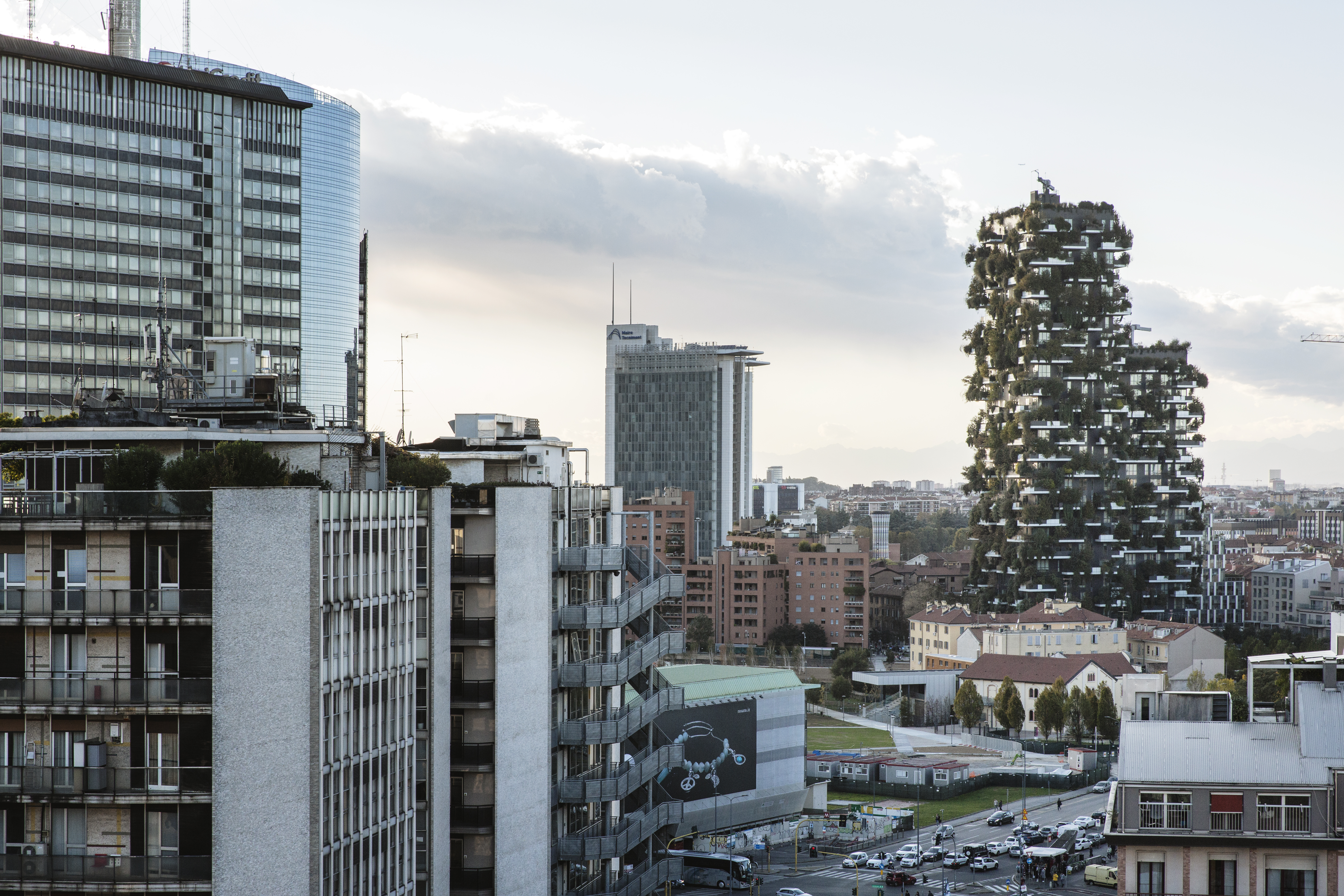 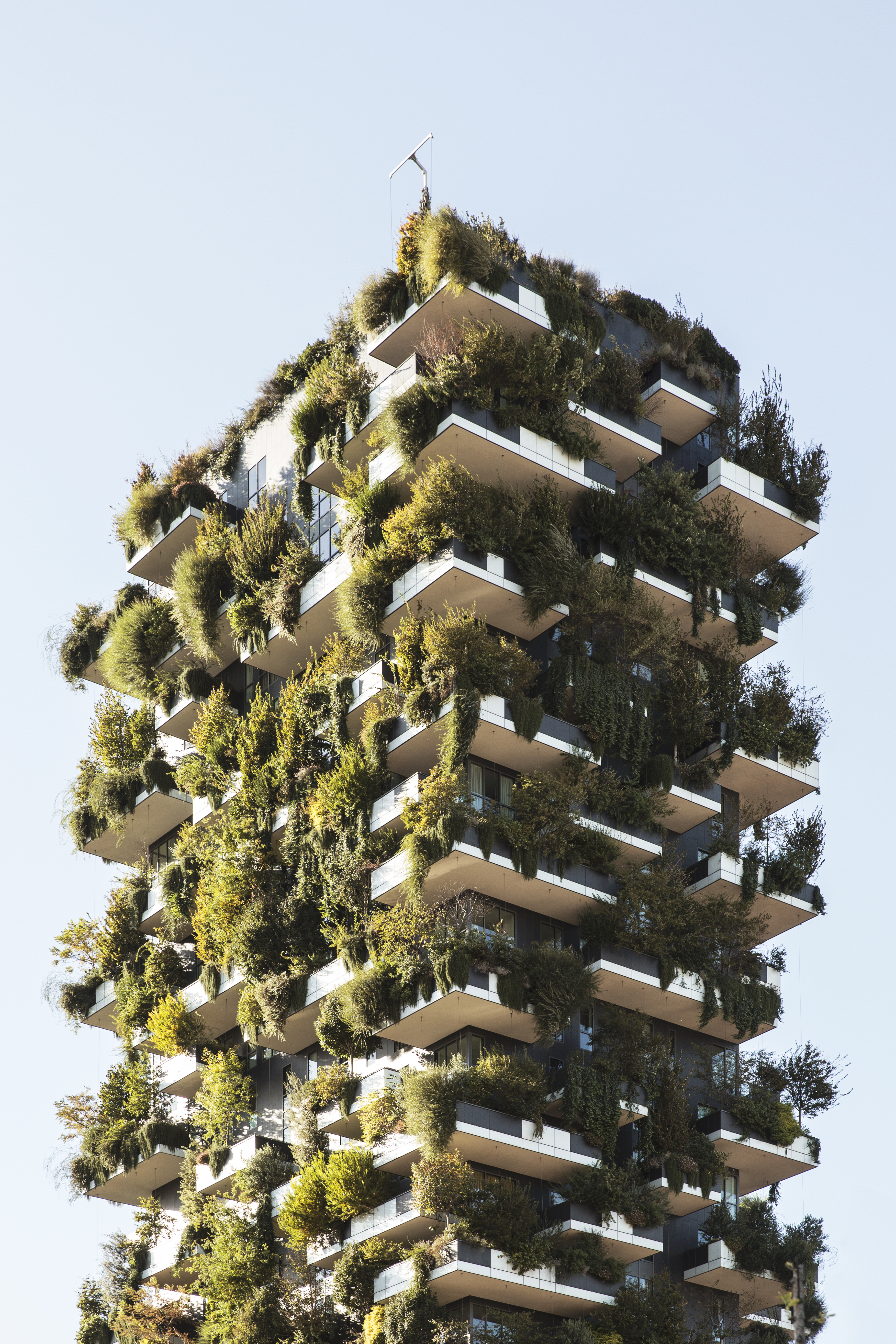 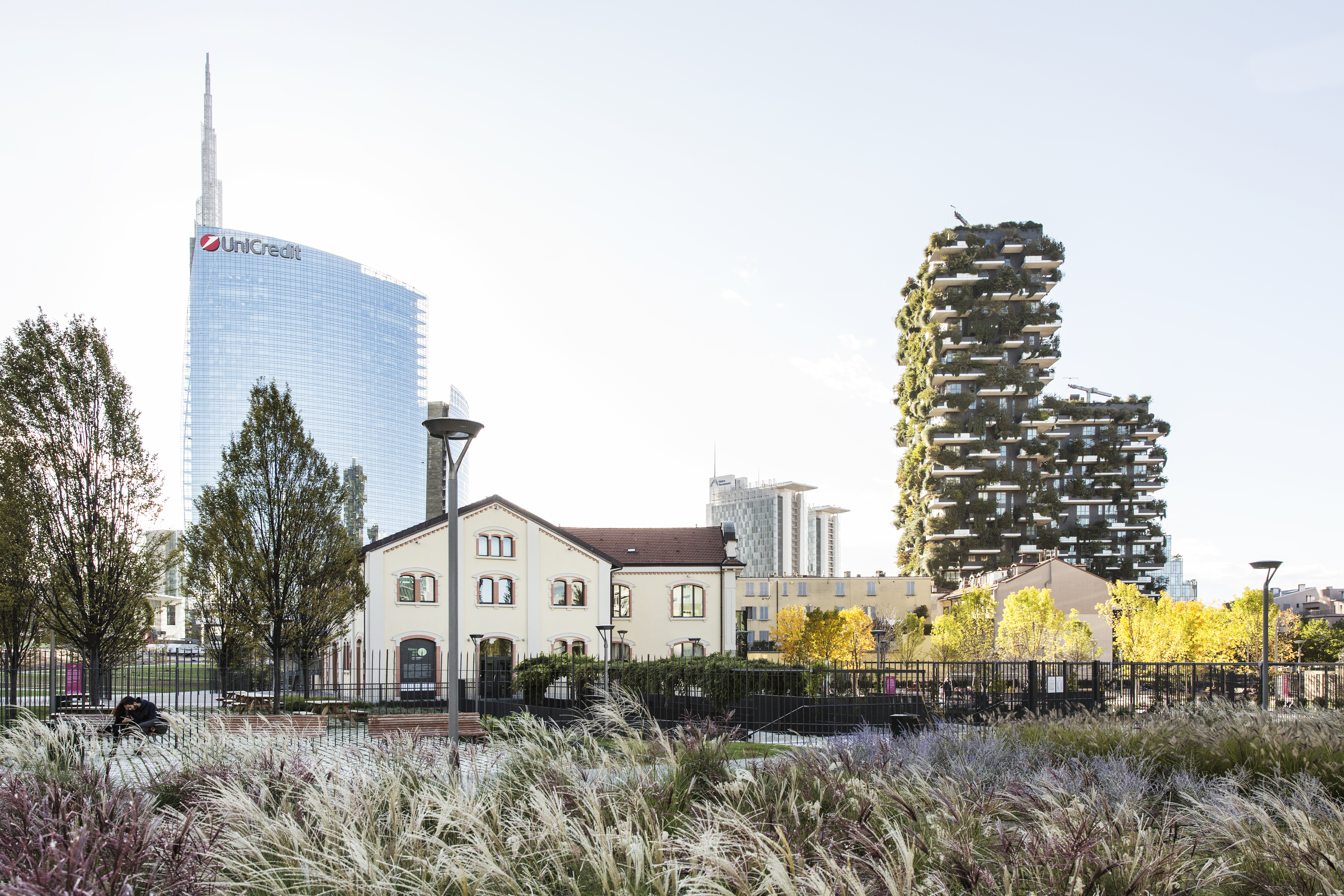 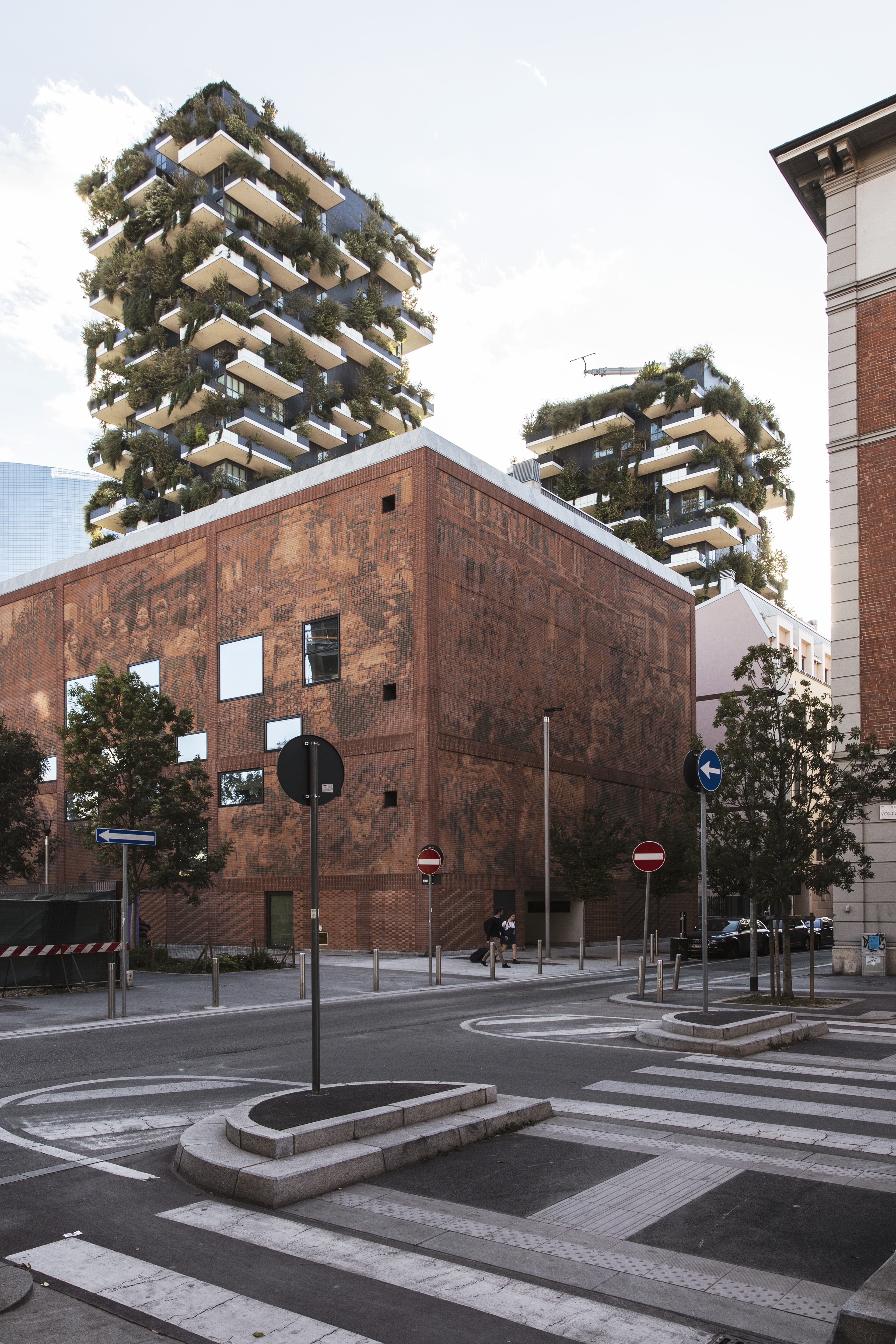 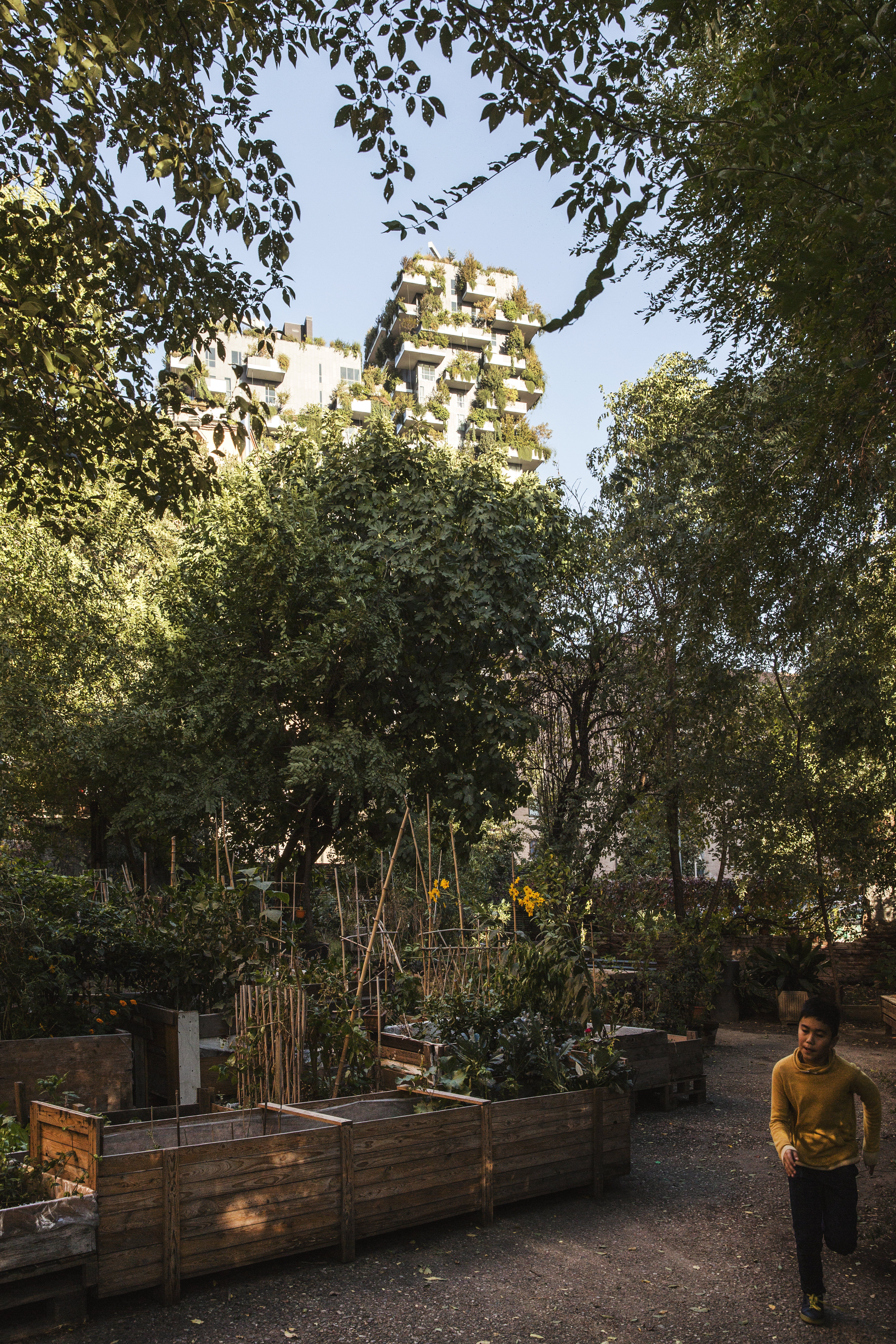 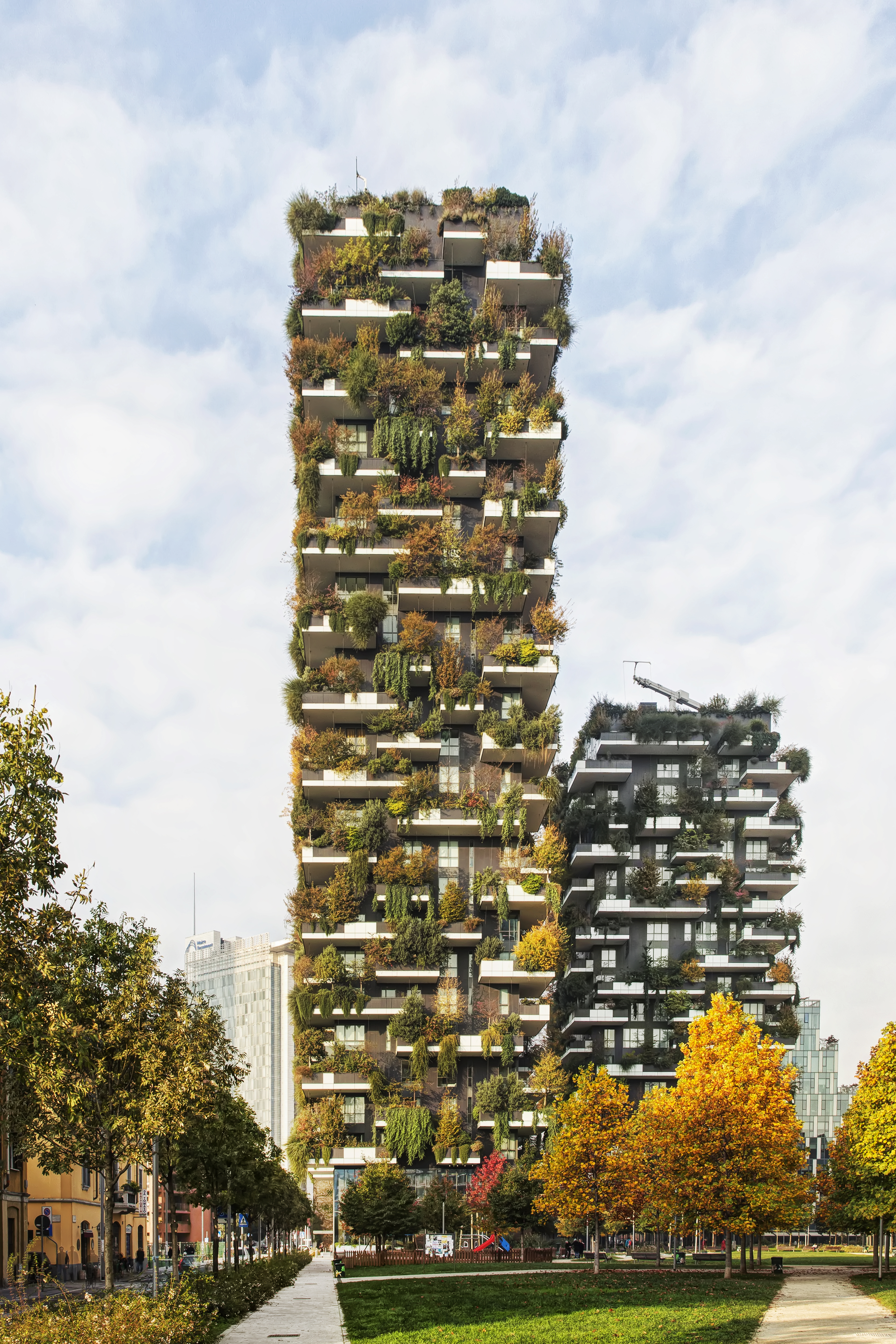 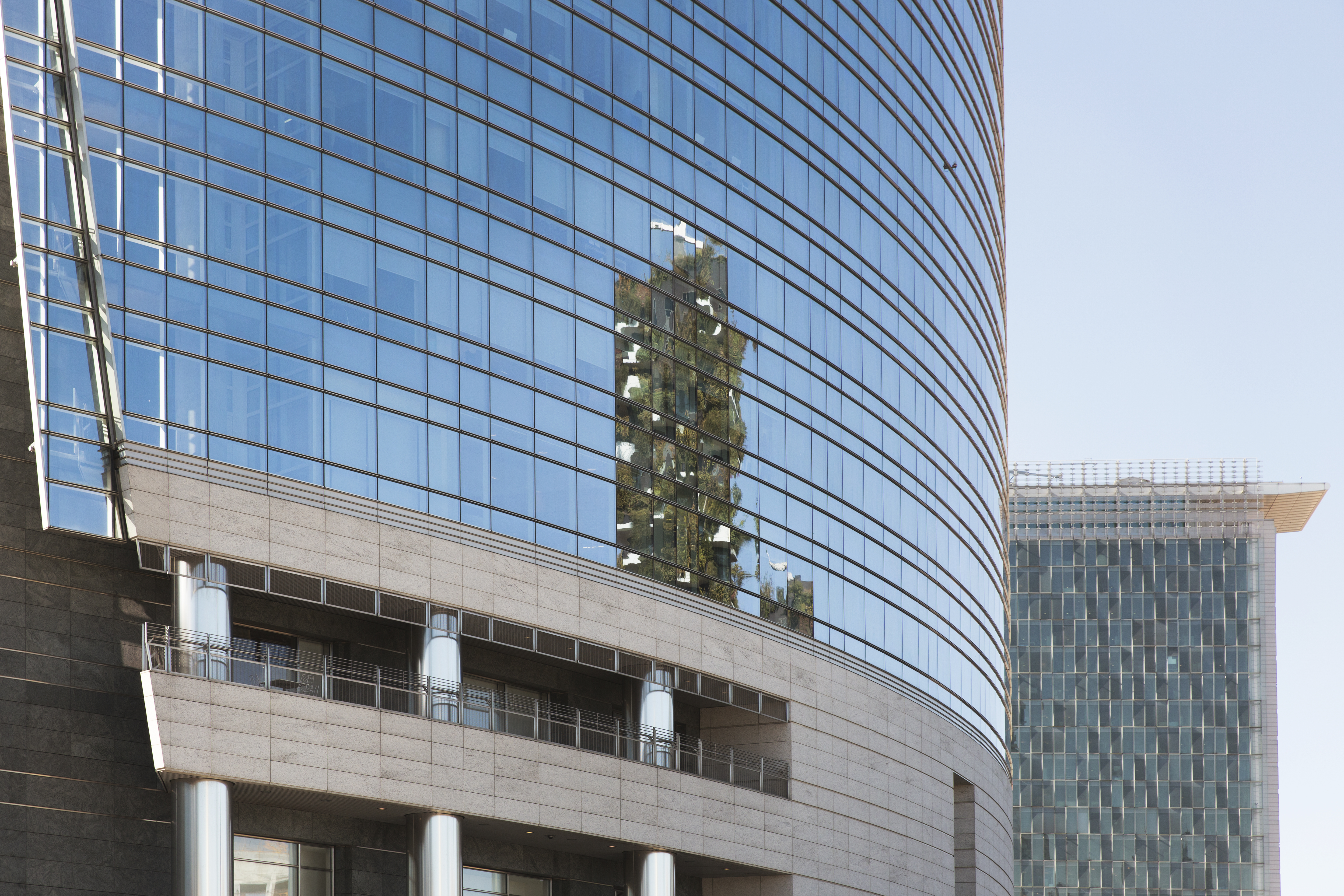 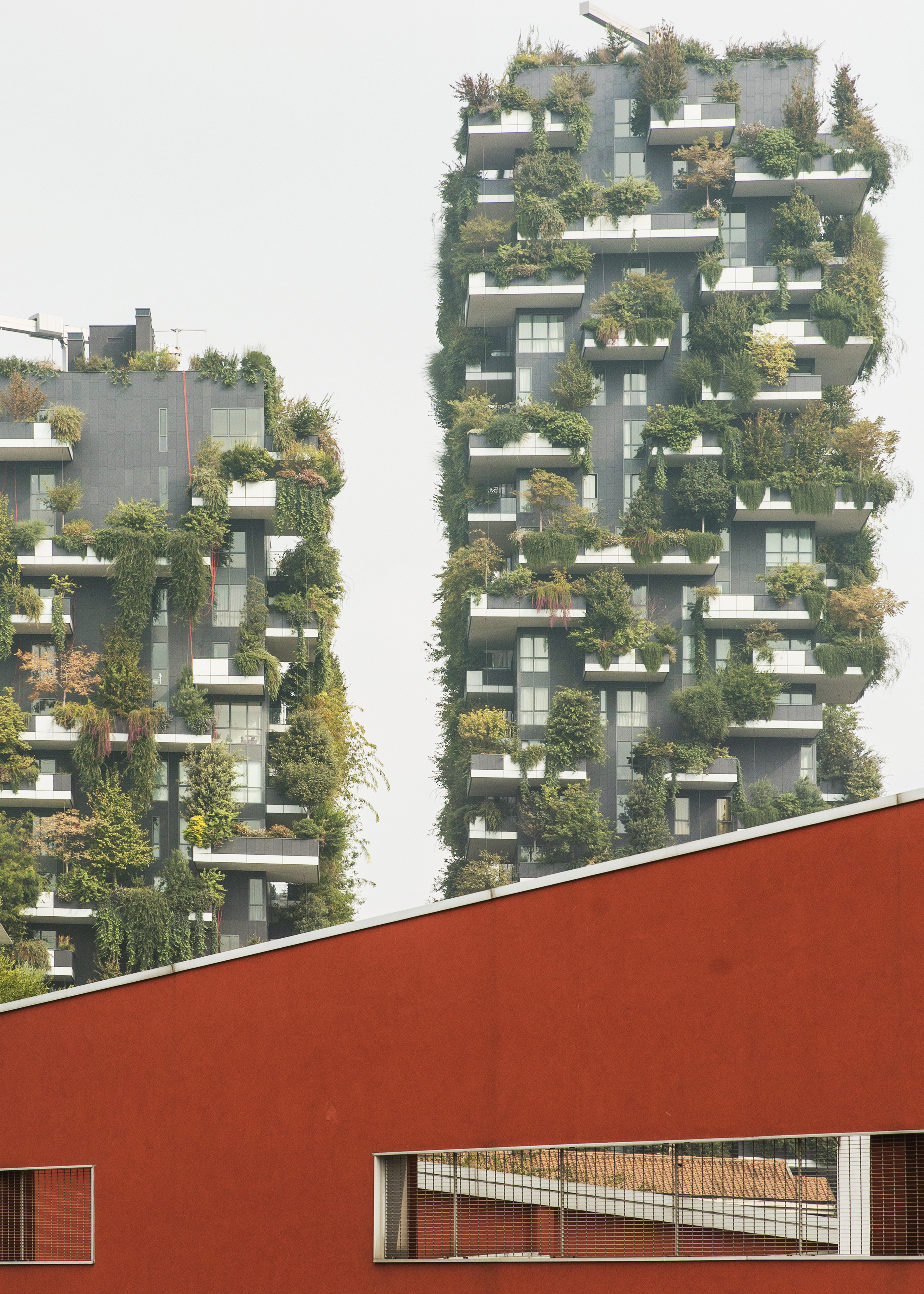 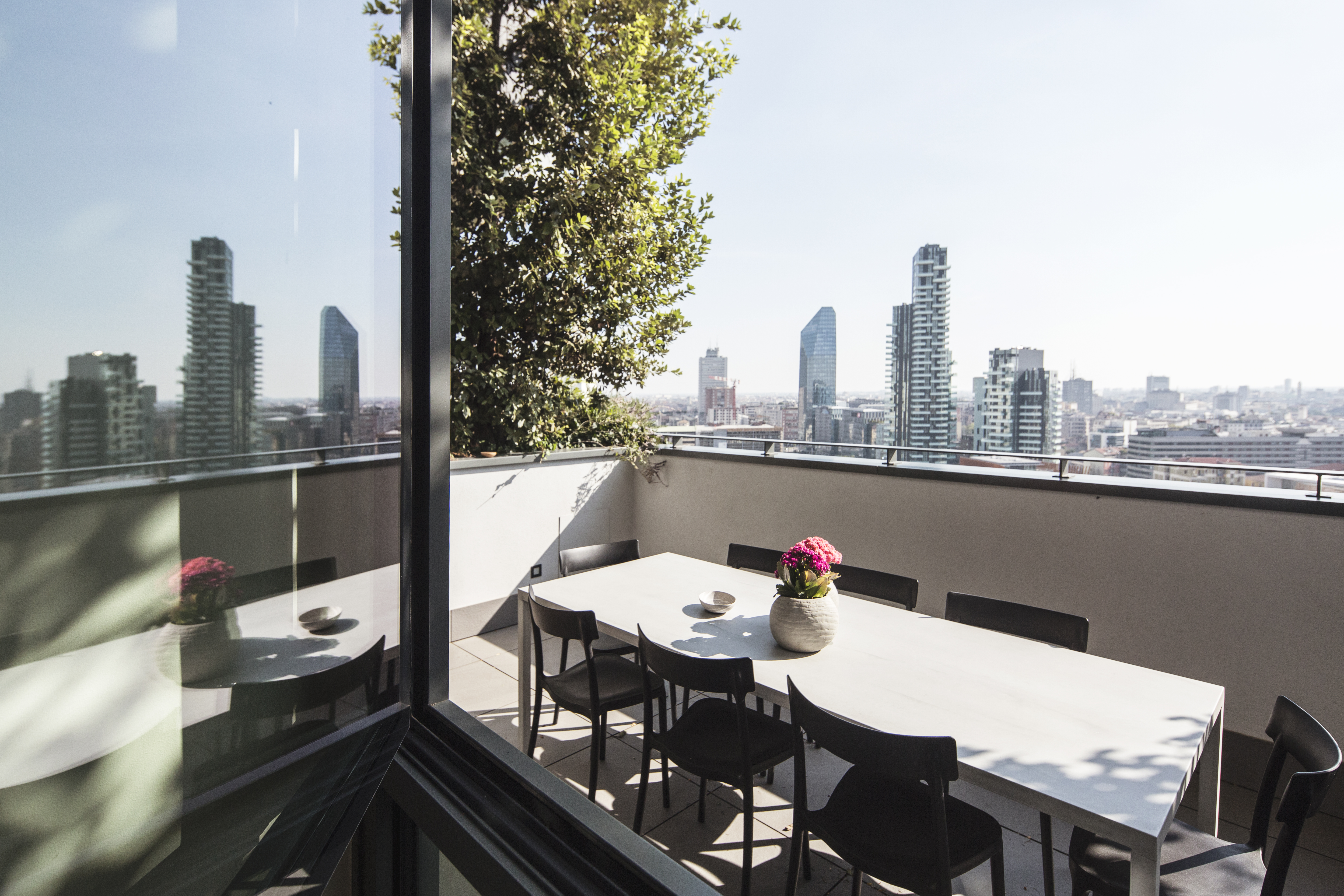 Vertical Forest is a model for a sustainable residential building, a project for metropolitan reforestation contributing to the regeneration of the environment and urban biodiversity without the implication of expanding the city upon the territory. It is a model of vertical densification of nature within the city that operates in relation to policies for reforestation and naturalization of large urban and metropolitan borders. The first example of the Vertical Forest consisting of two residential towers of 110 and 76 m height, was realized in the centre of Milan, on the edge of the Isola neighborhood, hosting 800 trees (each measuring 3, 6 or 9 meters), 4,500 shrubs and 15,000 plants from a wide range of shrubs and floral plants distributed according to the sun exposure of the facade. On flat land, each Vertical Forest equals, in amount of trees, an area of 20,000 square meters  of forest. In terms of urban densification it is the equivalent of an area of a single family dwelling of nearly 75,000 sq.m. The vegetal system of the Vertical Forest contributes to the construction of a microclimate, produces humidity, absorbs CO2 and dust particles and produces oxygen.

Biological habitats. Vertical Forest increases biodiversity. It helps to set up an urban ecosystem where a different kind of vegetation creates a vertical environment which can also be colonized by birds and insects, and therefore becomes both a magnet for and a symbol of the spontaneous re-colonization of the city by vegetation and by animal life. The creation of a number of Vertical Forests in the city can set up a network of environmental corridors which will give life to the main parks in the city, bringing together the green space of avenues and gardens and interweaving various spaces of spontaneous vegetation growth.

Mitigations. Vertical Forest helps to build a micro-climate and to filter dust particles which are present in the urban environment. The diversity of the plants helps to create humidity and absorbs CO2 and dust, produces oxygen, protects people and houses from harmful sun rays and from acoustic pollution.

Anti-sprawl. Vertical Forest is an anti-sprawl measure which aims to control and reduce urban expansion. If we think of them in terms of urban densification, each tower of the Vertical Forest is equivalent to an area of urban sprawl of family houses and buildings of up to 50,000 square metres.

Trees are a key element in understanding architectural projects and garden systems. In this case the choice of the types of trees was made to fit their positioning on the facades and by height, and it took two years to finalize it, alongside a group of botanists. The plants used in this project will be grown specifically for this purpose and will be pre-cultivated. Over this period these plants can slowly get used to the conditions they will find on the building.

Ecology billboards. Vertical Forest is a landmark in the city which is able to depict new kinds of variable landscapes changing their look over seasons, depending on the types of plants involved. The Vertical Forests will offer a changing view of the metropolitan city below.

Management. The management of the tree pots is under building regulation, as well as the upkeep of the greenery and the number of plants for each pot.

Irrigation. In order to understand the need for water, the plan for these buildings took into account the distribution of plants across the various floors and their positioning.